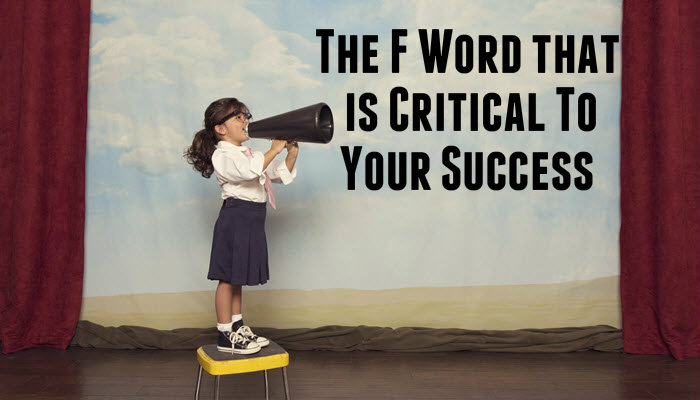 I know what you’re thinking and I’m not talking about swearing, ( although that would be fun. )

I’m talking to you about the word Failure.

There’s two huge myths about failure that we are going to bust here and now, today to make you feel better about it.

I’ll also share how to deal with it, and why it’s actually a requirement for success in both your business and your personal life. And, for the first time in public, two of my biggest failures in business.

One huge myth about failure is that if you make a mistake or you screw up or you fail that you are somehow doing it wrong, and that you shouldn’t make mistakes.

I’m here to tell you that that is not true.

Actually, failure is a requirement for success. To get to where you’re going, you need to become a different person.

In order to become a different person, you need to try, and trying includes failure.

It’s actually a requirement for success, so the more that you’re failing, the faster you’re growing, and the closer you are getting to becoming the person you intend to be, and grow the business that you’re trying to create.

For every failure, instead of thinking to yourself, “Oh, I screwed up. This is awful.”

I want you to give yourself a huge pat on the back because you are growing and progressing as a human being, so failure is not bad, it is awesome.

The second myth about failure is that not everybody does it.

I’m here to tell you today that, indeed, no matter what people look like on the internet, how perfect and together and successful, behind the scenes, it’s much, much different.

I am going to share with you two of my personal biggest failures in business. Just so you know, you are not alone.

The first one maybe would have made a lot of people give up, and it was the very first day I became an entrepreneur.

As a result, I signed up for $80,000 worth of debt on my very first day of being an Entrepreneur. That’s a pretty big failure! I had no idea what I was doing, and when I heard that I owed now $80,000, I was a little bit distressed certainly, but I did not let that stop me, and I kept going, and I paid off that debt, and 13 years later, here I am today.

You know what? I don’t regret it, because it just highlights and underlines the importance of not skimping on due diligence.

I learned a really important lesson that Lawyers and Accountants are there for a reason, and you should engage them, and pay them what they’re worth, because they can save you a ton of money.

The second biggest mistake that I think I made in business, and it’s debatable of course, is a bunch of years ago, I decided I was going to start a software outsourcing firm.

One of my awesome Software Engineers was moving back to Pakistan, and because labor is plentiful, and at lesser cost than here in North America, we thought we’d take advantage of that situation, and we would start the software outsourcing firm. He would handle all the people in Pakistan. I would generate clients here in North America, and we would work together and make a butt load of money.

We created the brand, the logo, the website. We had a list of target clients. I spent so much time and so much money on getting this business up off the ground. I did not stop to consider, would I actually enjoy it? Would I like this business? Did it fulfill a greater purpose in my life? Is it something that made my heart sing?

While all that stuff sounds really fruity, you know, money is not the only motivator.

You need something bigger. You need a bigger why to get out of bed in the morning. It was only on the very first day that I had to pick up the phone and make that very first cold call, did I realize, I don’t want to do this!

What an expensive mistake. I had to let my partner down in Pakistan. I had spent all this money on marketing collateral and tons of time, and again, a big lesson that I learned was that you need to have a big why in your business. You need to have a mission. Otherwise, it’s not going to work.

I wanted to share that mistake with you as well, because that was a big one. A big doozy!.

You know what? It was just a really, really expensive lesson.

Another way to sort of mitigate mistakes or go through them faster is to have a mentor or a community in which you participate of other entrepreneurs, so you can learn from their mistakes, like hopefully you’re learning from mine today, to reduce your learning curve.

The very last thing I’ll leave you with is a motivational quote by Teddy Roosevelt. It’s my absolute favorite.

“It is not the critic that counts. Not the man who points out how the strong man stumbles or where the doer of deeds could have done them better. The credit belongs to the man who is actually in the arena, whose face is marred by dust and sweat and blood, who strives valiantly, who errs, who comes up short again and again, because there is no effort without error and shortcoming, but who does actually strive to do the deeds, who knows great enthusiasms, the great devotions. Who spends himself in a worthy cause, who at the best knows the triumph of high achievement, and who at the worst, if he fails, at least fails while daring greatly.” That’s Teddy Roosevelt.

If you like this video, please Like it, and consider sharing with your network. Thank you for watching.